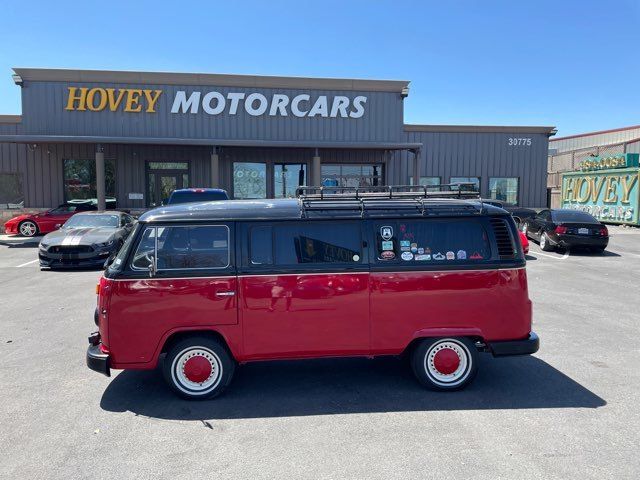 Our Price Call for Price

Mexican Import - 1992 GTI 1.8L 8 Valve Engine - Interior Converted to a 'Camper' -
Eagle-eyed readers who have knowledge of VW Buses will have already noticed that our listing says '1986 Bus'. This is a Type 2 Bus (T2), and sales of the Type 2 model Bus ended in 1979 in the US. This Bus was properly imported from Mexico where sales of the Type 2 continued through 1994. And yes, that is a radiator on the nose. It is liquid-cooled.

The two tone paint on this bus looks great, and has a very nice finish. Roof rack, front driving/fog lights, and white steel wheels with red hubcaps are notable features on the exterior of this Bus.

The interior is nicely appointed with curtains, cabinets, cooler, fold up table, extra storage bins, fold out bed, and a slightly different dash than the T2's we had stateside. Pioneer speakers have been added, and are connected to a head unit that has an old look, but connects to Bluetooth. The interior is a great place to be when on the road, or spending time in at a campsite.

A 1.8L 8 valve engine from a '92 VW GTI was installed in place of the original engine which had a catastrophic failure. The GTI engine provides a bit more power than the original engine, giving this bus a little more pep in its step! During the previous  client's ownership, this Kombi was faithfully taken to European car specialists German Auto Service in Grand Rapids Michigan for service.

Make your own adventure in this T2 Bus, it's ready for years more smile inducing miles of travel!

210-384-0084  HOVEY MOTORCARS well know all over the World now for 23 YEARS providing UNIQUE one of a KIND Ultra Low Mileage Exotic, Classic, Custom Trucks and MORE!  see our  web site and FACE BOOK.