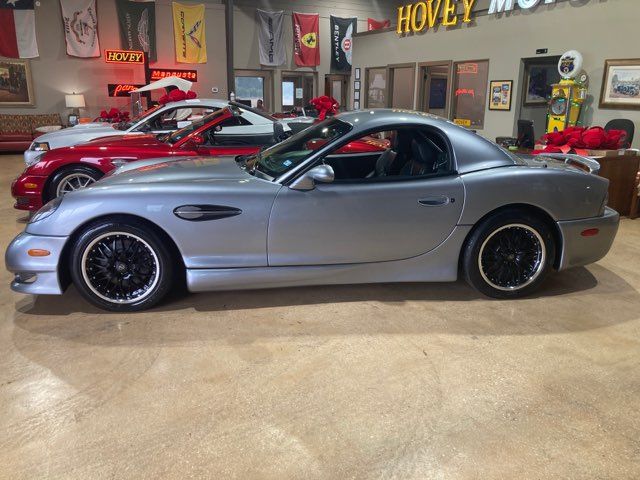 Our Price Call for price

This 2002 Panoz Esperante GTLM Coupe was hand made at the Panoz Factory for Celebrity Patrick Dempsey.   This was the first Street Legal Coupe made.  The Drivers compartment tub is Carbon Fiber, as well as the prototype top. The carbon fiber is polished in the door seals.   This vin on this Panoz is ends in 76, meaning it is the 76th Panoz produced in 2002.  The panoz also has a chassis number.

In 2002,  I was at the Panoz Factory getting our Panoz  Certification and met Patrick Dempsey as he was designing his personal Unique Panoz.   Hovey Motorcars was a Certified Panoz Dealer.

This Particular Panoz is extremely rare, as it was the first custom coupe. The other unique thing that separates this coupe from the later ones  is the  "A" pillar and the top are one piece.  The later versions had a seam after the "A" pillar.   Most of the the GTLM produced after were all convertibles.

Patrick Dempsey was just starting his racing career, and so he wanted this Panoz with more horsepower.   He has smaller pulley put on the supercharger for more boost.

The Panoz Esperante  is a mid-engine, front engine car with almost a 50/50 weight distribution.  It is powered by a 32 valve Ford SVT supercharged motor with a tremec 56 6 speed transmission.   It uses Ford Electronics, too.  But that does not mean it is a Ford.

Panoz  hand built the Esperante Just north of Atlanta, Georgia.     It has an Aluminum Chassis as well as aluminum body panels.  The body panels are non-structural.   The Chassis is modular, build in 5 sections.  It has a huge crumple zone in the front, with a blocker beam.   The Esperante is very, very solid and Safe.

With the Ford components, it is easy to service, yet very exotic.  It is American made.

With less than 500 Panoz Esperante's  Built over the years, don't hesitate to jump at this one.  You May never see a Coupe again offered for sale!