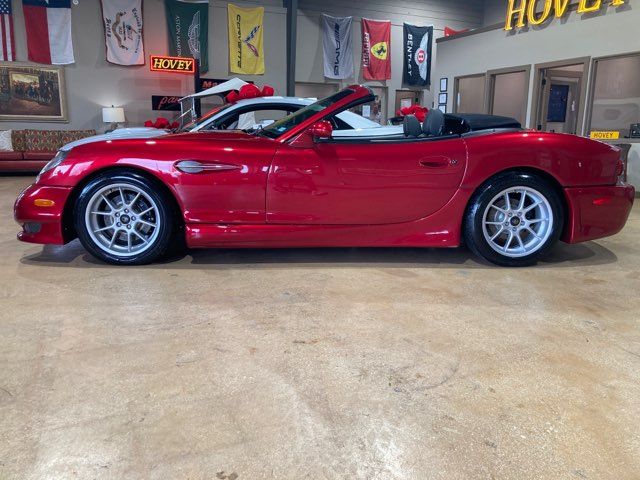 Our Price Call for price

2005 PANOZ GTLM SuperCharged Esperante Convertible, one of a handful of vehicles built by the PANOZ Company in Georgia, Original MSRP $115,000. this car has 4,500 ACTUAL Miles, and is like NEW! Today the ALMOST Same Car is listed for $189,995. Check out the JAY LENO Garage U Tube Test Drive!  The Panoz Motor Sport Group  fielded successful teams racing the Panoz Esperante GTLM, a racing version of the Panoz Esperante GTLM two-seat sports car. Built specifically to compete in the GT2 Class at the 24 Hours of Le Mans and in the American Le Mans Series ALMS, it featured a naturally aspirated stock Ford V8 bored to 5.0 liters with custom engine components producing 500 horsepower, in 2005 it beat the Porsche 911 at the Raceway.  Look up the AMAZING Panoz HISTORICAL wins from 1997 to 2007.  Own an Amazing piece of American RACING History with this Vehicle. Vehicle will be Ready AFTER Thanksgiving !  Financing Available 210-384-0084  Call Rich Hovey Sr he was a Panoz Dealer for 10 years and the #1 Panoz Dealer in America for Several of those Years!