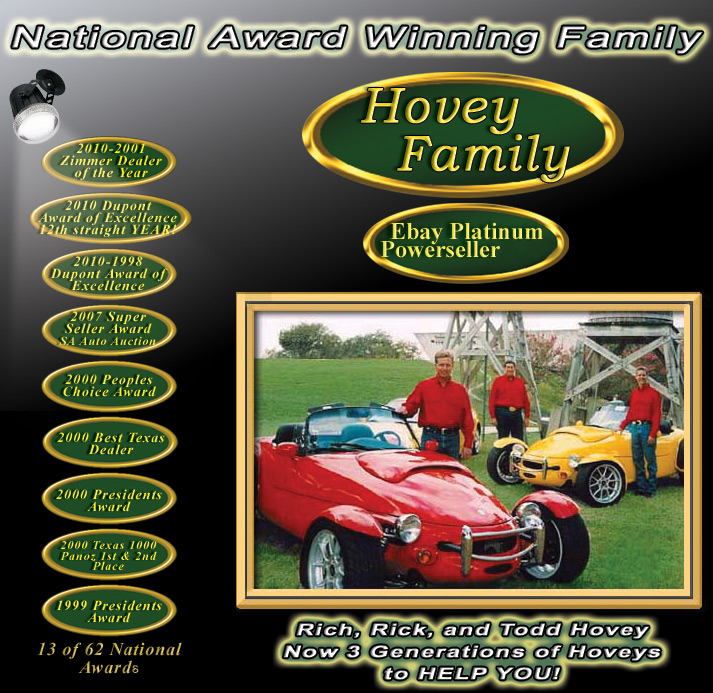 These are not the best of times for car dealerships. The global economic downturn has American auto dealers’ sales plummeting 35 percent from the same time last year, according to J.D. Powers and Associates. An industry bright spot was the government’s “Cash for Clunkers” program, but that, while stimulating sales of more than 625,000 new vehicles, was shut down Aug. 24.

However, in North Central San Antonio, owners of a small dealership say they are bucking sales trends, and even continuing to turn a profit.

Hovey Motorcars, 9919 San Pedro, isn’t breaking any records, admits Rick Hovey Jr., sales and finance manager. “We now have fewer employees and lower expenses, and we’re looking for any way to cut overhead. I think that’s one of the key things defining this business right now,” he says. “If you are going to sell fewer cars, you need less overhead. We’ve worked on that and, so far, it has worked very well.”

And the 11-year-old Hovey Motorcars has a special challenge — or advantage, depending on how you look at it: The independent dealership sells only used — “previously owned” in the industry parlance — luxury vehicles, including Porsches, BMWs, Jaguars, Audis, Mercedes, antique muscle cars and the handmade Zimmer automobile, of which only 850 have ever been built.

Founded by Rich Hovey Sr., who personally handles the Zimmers and muscle cars, the dealership staff features not only son Rick doing sales and financing, but son Todd as service manager as well as nephew Larry as online sales manager, offering cars on eBay and Craigslist. The dealership has a total of a dozen employees.

The family has always been immersed in the car business. Rich Hovey, or “Senior” as he is called, moved from the family’s hometown of Phoenix in the 1980s to buy into an East Texas dealership. But when that purchase fell through, a mutual friend introduced him to management at Red McCombs Ford, 8333 Interstate 10, where he became a sales representative.

Rick Jr. was attending Arizona State University, graduating with a degree in small business management, and, at the same time, worked at his wife’s family’s Phoenix Honda dealership, apprenticing in all aspects of the business.

Just before Rick’s graduation, his wife, Denise, visited his parents in the Alamo City. “She fell in love with the town. She came back and said we were going to move to San Antonio,” he recalls. “I’d never been here, but as long as the wife was happy, I’m happy.”

Moving to Boerne, Hovey went to work alongside his father at the McCombs Ford operation, handling finance and insurance functions. But facing long days, midnight madness sales and not getting to see his wife and then-infant daughter very often, he left to run a recreational vehicle dealership in Seguin. Three months later, the McCombs management called him, saying they were opening a new dealership called the Galleria at 8333 Broadway that would sell high-end previously owned vehicles and asking if he would rejoin their team.

“The RV operation had good products,” Hovey says, “but the business had a lot slower pace and probably wasn’t me.”

In October 1995, he began selling cars at the Galleria, now Gonzaba Autoplex, working alongside his father and brother Todd. Three years later, the Hoveys were bit by the entrepreneur bug.

“The Galleria had this concept of pre-owned luxury cars and we were involved heavily with the local Porsche club, selling Porsches, Mercedes and Jaguars,” he explained. “So this was not new to us. We were doing well and liked working at it. But I thought that, in the long run, we’d be better off on our own. We’d control more of our own destiny.”

Helped by an investor, a former Galleria customer Hovey declined to name, Hovey Motorcars opened in 1998. “All of this came from thinking that we could build our retirement, build it into an income-producing deal — and that I’d have more time off with my family,” Hovey says. “The truth is, I probably work just as much and, in this economy, I probably work more. You have to these days.”

Best in the lot

But even in the face of the economic downturn, Hovey, with his line of luxury vehicles might have a slim advantage, according to Jeff Martin, executive director of the Austin-based Texas Independent Automobile Association.

“That segment of the business doesn’t look like it has been hit as hard by the recession as the blue-collar bracket,” Martin says. “With that being said, many middle-class buyers and their credit were affected, so we’re seeing a flood of new buyers looking in that market. The big holdup is that there are not as many used cars out there.”

New car dealers, hit by flagging sales, are not seeing the usual volume of trade-ins, Martin explains, and the government’s “Cash for Clunkers” program helped put a spike in new car sales, but trade-ins under the program had to be destroyed.

“That offered everybody less of an opportunity,” he adds. “There is not the supply of vehicles there used to be. We are seeing that demand is still there, both from dealers and consumers, but I expect they have a harder time finding vehicles than in the past.”

Gross sales for Hovey Motorcars have topped as much as $13 million a year, but, Hovey says, usually average between $8 million and $9 million annually. “And the margins are tight,” he adds. “On a $50,000 Mercedes C-class, for instance, you might get 4 percent. In general, most dealerships have margins under 10 percent and that’s not a lot of leeway.”

Almost half his inventory comes from national auto auctions, which today are the primary source for most of the used car industry’s product. Hovey both buys and sells through that system.

“The whole goal is to turn your inventory,” he explains. “You have less carrying costs, less interest, less advertising expenses, less everything.” Trade-ins sometimes don’t fit a dealer’s profile. Hovey, for instance, had a 3,000-mile Jaguar purchased at auction that came from a BMW dealership. “They may just not have been able to move it; it wasn’t their cup of tea.” And turning inventory is vital to control costs. “If a car stays on the lot 60 to 90 days — and some dealers are on 30-day turns — it means they might have to sell it and run it back through the auction,” he explains. “It might be a front-line-ready car and nothing wrong with it, but they just didn’t move it in the time allotted. In this economy, just like everyone else, I carry less inventory and try to move it quicker.”

Branding is another big part of auto sales, Hovey notes. His target customers tend to live just north of U.S. Hwy. 281 in Stone Oak, Hill Country Village and Hollywood Park, “but I think that we may be, in fact, somewhat over branded (as a luxury dealership). The fact is that a two-year-old, fuel-efficient, low-mileage luxury car can depreciate as much as 50 percent. With pre-owned vehicles, my market starts at $20,000, not $100,000.”

But by cherry-picking the auction sales and cutting expenses, “the last eight months have been positive months for us,” Hovey says, “which is something a lot of dealers can’t say. We’re working harder, but we’re happy we’re still here, that we can still do what we do.”

NEWS RELEASE: DuPont REGISTRY MAGAZINE Vice President Shane Burden has contacted Rich Hovey Senior and Confirmed that they are winning the AWARD of EXCELLENCE for 2009
this is the 11th Consecutive YEAR! NO OTHER CAR COMPANY in AMERICA has been the recipient that LONG! CONGRATULATIONS to The Hoveys and their Great Staff and all the Wonderful Customers all over the WORLD! 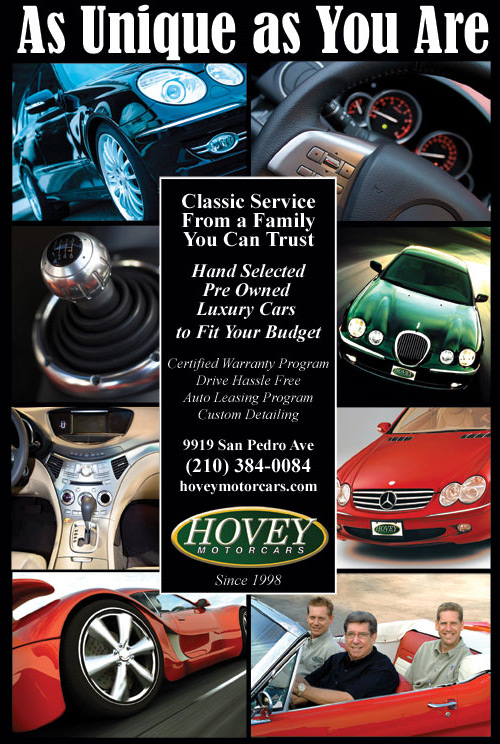